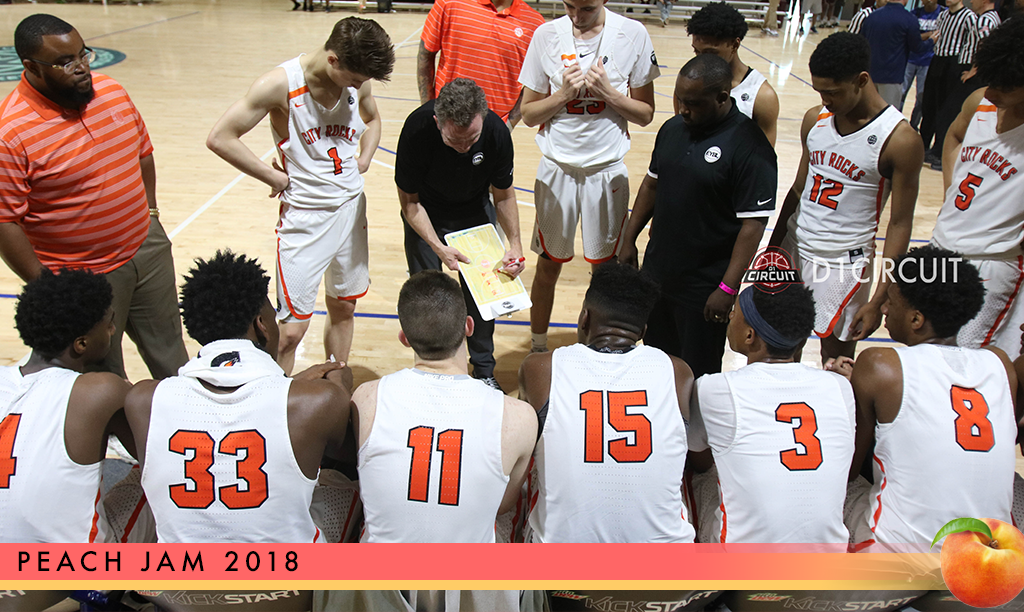 As expected, the City Rocks are qualified for Peach Jam. Due to having some elite depth and an experienced coaching staff, the City Rocks were a tough team to beat this season. They had their struggles in the beginning where they went 2-2 in the first session, but hit their stride in middle of the season where they went 7-1 in sessions 2 and 3. They can attack opponents in multiple ways. They have ESPN’s 5th ranked player in the nation for the class of 2019 in Isaiah Stewart. They have possibly the best shooter in the nation in Joe Girard III and balanced guard play from Mika Adams-Woods, August Mahoney, Symir Torrence and Noah Hutchins. They wear down opponents with how many different players are in their rotation and how disciplined they are. It goes without saying, but they are capable of taking home the Peach Jam trophy.

The City Rocks star is Five-Star center Isaiah Stewart. People had high expectations for Stewart heading into this season. He had just finished his first year at La Lumiere (IN) where he had been tested all season long at a national level and had gotten in top physical shape. It’s safe to say that Stewart met those expectations and then some. He finished this season averaging 17.6 points and 10.6 rebounds per game. What might be more impressive is that he shot 58 percent from the field on 200 total shots. Stewart always had a big frame, but has made himself that much more of a threat with how well he has developed his skill set. Out of the 16 games this season, he has had 9 triple doubles. He is a tremendous talent who will be nightmare for teams when Peach Jam arrives.

As mentioned before, the City Rocks backcourt is a well balanced attack. They have their shooters in Joe Girard III and August Mahoney, toughness and athleticism in Noah Hutchins and Symir Torrence and playmaking in Mika Adams-Woods. The biggest name of the group is Joe Girard III. Girard is a lethal shooter who can end a game in just a couple of possessions. Head coach and program director Jim Hart runs the right sets to free Girard for open looks and make plays around the perimeter. Yale commit August Mahoney is shooting over 40 percent from three this season, which is exactly what the City Rocks needed of him. Mahoney is a great decision maker who knows his role and does it very well. Noah Hutchins is as tough as they come. He competes on both ends and usually him or Symir Torrence defends the opponents top guard. Torrence plays a big role on this team and has come up big for his team in certain games. Against UPlay Canada he scored a key 13 points to help his team win 61-58. Mika Adams-Woods runs the show for the City Rocks. His feel for the game and ability to create for himself and others is what makes him the prospect he is.

The City Rocks frontcourt doesn’t have nearly as much depth as their backcourt, but they definitely have talent. Their frontcourt has one of the top big men in the country in Isaiah Stewart. With the lack of depth Stewart makes up for just how productive he is on the floor. He has greatly improved on his conditioning as well so he is capable of staying on the floor almost the entire game. They have also received solid contributions from Jake Cook and Myles Wilmoth. Cook broke out against Brad Beal Elite when he scored 16 points and Wilmoth has a nice skill set. Their frontcourt all draws back to Isaiah Stewart, but if they can get solid performances from guys like Cook and Wilmoth in July they will be that much more deadly.

The City Rocks stand in the same position they did prior to this EYBL season. They are still in a position to win it all. Like most teams this season they had their down moments and didn’t finish the season like they wanted to with losses to Bluff City Legends, CIA Bounce and Mokan Elite. Even with their record being 1-3 in the final regular season session, their middle of the season run can’t be ignored. The City Rocks play disciplined basketball with plenty of talent, which is always a good combination. Looking toward their competition, they are 5-5 against Peach Jam qualified teams including 20 points wins over the NY Renaissance and Brad Beal Elite. They are 1-2 against opponents in their pool, which they will like to turn around next week. When looking at the City Rocks roster it’s clear that they lack size, but the good news is the rest of Pool D does as well. It sounds simple, but the City Rocks need to play to what they do best. Stewart needs to play huge like he has and Girard needs to catch fire like he is more than capable of doing. Jim Hart’s squad is a dangerous opponent for any team at Peach Jam.